Will Drafting Services in Dubai, UAE for Non-Muslims

The last will and testament or living will is a legal document that has the plans of a testator regarding his or her assets or personal matters and names of the beneficiaries. Expatriates can register their wills in Dubai, which can be applied in any Emirate in the UAE.

When one does not have  wills and trusts drafted or does not have any plan in setting up or writing a will at all while being a resident in the UAE, a couple of undesirable things for their part could possibly happen, such as frozen bank accounts (single or joint), canceled dependent visas, application of UAE law during your predicament that can be unfavorable for your perspective, possibility of frozen/delayed investments and the likelihood of arguments within the family regarding the assets.

The above mentioned UAE law is called the Sharia law that will govern the distribution of assets and such when a last will and testament or a living will is not present. It can be undesirable for the person and for the family that is left behind because Sharia law has its own principles that are followed.

It should be noted that when a person or a testator decides to make a will in Dubai, they must be 18 years of age. The chosen executor must be of sound mind. There can be types of a last will and testament and an opinion of a wills solicitors or lawyer is needed for you to be sure which one most likely applies to you and best suits you.

This is for uncomplicated finances and assets of testators that only need to be distributed. Since, it is not exactly difficult to do, many people draft this kind of will themselves. Even when this is the case, it is still advisable to get the services of a lawyer for ensuring every legal matter that needs to be included in the will is written and followed. Even though it seems very simple but mistakes can still be made. So, an attorney’s assistance will do well with this.

Same as any other wills, it should be stated which assets should go to specific beneficiaries. The executor’s name should also be included in writing the will.

If you want to have at least some of your property to be placed in trust when you make a will, it’s called a testamentary trust will. A third person will have to decide how should it be distributed and when. This kind of will has a good purpose for financially irresponsible people whom you choose to be your beneficiaries. A third party or a trust administrator will be the person to decide when and how to distribute the assets. It’s not given in lump sum for financial discipline to the beneficiary.

This kind of will is made by two people. In the event that one of the testators dies, all their assets will go to the second testator. It is also stated in the will how and when all the assets will be distributed in the event of the second testator’s death. It is considered to be irrevocable unless the two testators agree on changing it. So, when one of them dies, it cannot be changed at all.

This one is different from the other types of wills that are mentioned above. This is not about the distribution of assets but a request of a testator on how they would want to be medically treated. A testator can specify that in the event that they are too ill to decide on their own or too sick that their body is in need of a machine to function, they can leave instructions on what the executor should do. It’s either they would want to be connected to a machine or die without it.

This can make family take decisions with regard to this kind of event as it is the request of a person on a living will. 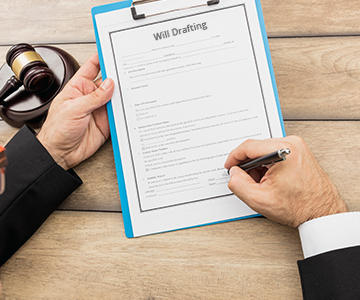 HHS Lawyers and Legal Consultants is one of the leading legal service firms that offers will writing services in Dubai. We also have will drafting services in Sharjah and other parts of the UAE. We have a team that is specialized in this field and in other branches of law. Our lawyers in Dubai can help you to write your own will and get it registered.

If you are looking for a probate attorney, we can give you the aid that you need, may it be on helping you with some other legal matters or if you are simply looking for contract drafting services in Dubai.

Writing a will may be a difficult task and that’s why HHS Lawyers and Legal Consultants, having more than 30 years of experience in the legal field, can give you an assurance that we can provide a quality service to make a legal will.