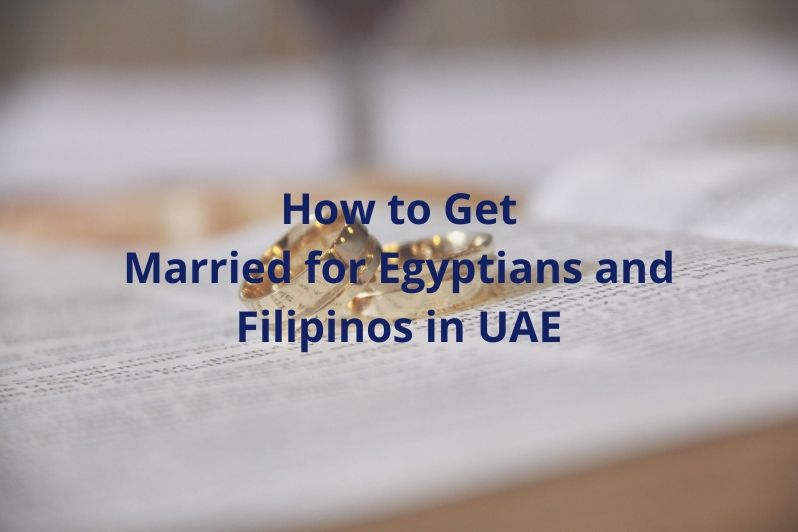 Getting married in Dubai has its own set of processes. A dream wedding can be planned depending upon the nationality, citizenship and residency status in Dubai which can range from the straight forward and simple to time-consuming in all cases, specific conditions must be followed and documents have to be attested and approved by several parties.

A common situation is for Egyptian men to marry Filipino women wherein the Christian has to convert to Islam first. Two individuals can get married at a Dubai Court if at least one of them is Muslim and both are residents of the UAE. The rule clearly states that the man should be a Muslim, while the woman can be of any religion in order to marry in Sharia court.

In order for a marriage to take place, a couple has to fulfill the below-mentioned requirements.

Valid permit to stay within the country

Anyone of the parties to the marriage should have valid permission to stay within the country. There is a need to furnish national ID and passport for proof of identity and visa status.

Parties initiating the process of getting married in UAE should undergo a medical screening that can present their health status. The medical certificate issued will mention that the parties wanting to get married are medically fit to initiate marriage.

Copy of divorce paper if applicable

Divorcees should submit official certificate/divorce judgment. In the case of widows and widowers, they have to submit the death certificate of their deceased spouse. All certificates not issued in the UAE should be legally translated into Arabic and ratified by relevant authorities in UAE.

If a Filipino is marrying an Egyptian national, there is a need to make sure that he/she should contacts his/her own councilmate or embassy. They should obtain an NOC letter as a requirement.

Presence of both parties involved

Presence of parties to the marriage required, plus the guardian of the women and two Muslim men as a witness.

In cases where the bride’s father is deceased, a declaration of death and consent from any other male guardian of the bride is required. In cases where there are no guardians to offer consent, a special power of attorney proving this will have to be produced. All the legal aspects regarding the requirement of witnesses for initiating court marriage can be explained by experienced marriage lawyers in Dubai.

The law permits a Muslim man to marry a non-Muslim woman, only if the woman submits a conversion to Islam certificate.

Certificate of embracing Islam should be submitted by newly converted female Muslims and other certificates from any Islamic center approved by the General Authority of Islamic Affairs and Endowments.

What Are the Requirements for Foreigners Get Married in Dubai?

Conditions to Get Married for an Egyptian and Filipino

There are several conditions and requirements to get married in Dubai, and it is important to respect the applicable laws in this city and in the UAE. Foreigners wanting to marry in Dubai should pay attention to all the requirements in this matter, among which, the following are quite important: