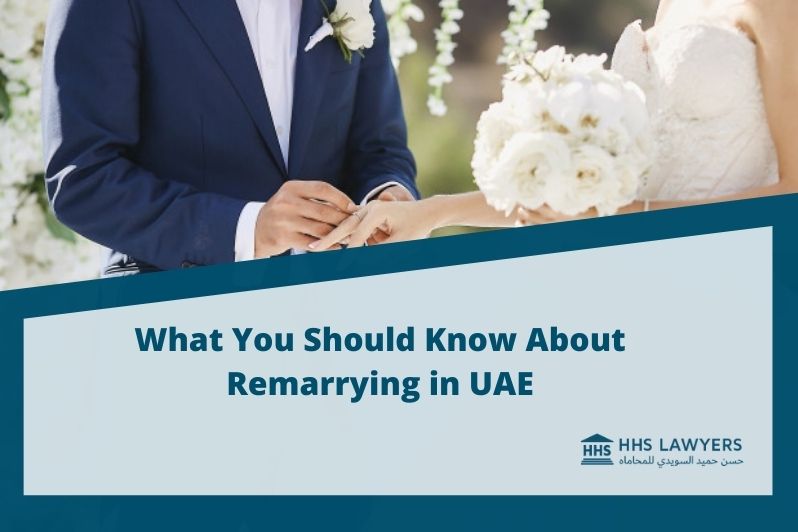 If you’re divorced and are planning on embarking on a subsequent marriage, there’s a couple of important legal points you should be putting into consideration. We know the circumstances of second marriages are always complex compared to the first one. There could be assets that have been acquired from the first marriage such as businesses, pensions, savings, properties, and investments. Not to mention kids.

Remarrying, particularly in the United Arab Emirates, often involves making difficult legal, financial, and emotional decisions. We’re utilizing our experience and expertise in this area in order to help you make important decisions in relation to remarrying in UAE. If you want to speak with a marriage lawyer in the UAE today, call us!

How a remarriage differs from the first marriage in the UAE

Take note: for women who are awarded child custody of a child in UAE, she is not allowed in marrying a foreign husband unless there is the approval of the court as it sees it will be in the best child’s best interests.

Getting Married in Dubai: What are the Legal Requirements for Expatriates

Is a prenuptial agreement important in UAE?

Yes. A prenuptial agreement would prove to be useful. It’s a written agreement that’s signed prior to a couple being wed. It’s designed in setting out what a contracting party wishes to happen with possessions and assets in the event that the marriage breaks down.

A prenuptial agreement is not binding legally unless it is drafted properly and contains all the elements of a contract. It has to be drafted properly and fairly in order for it to be upheld by local courts. When it comes to legal drafting in the UAE, it is always best to consult with lawyers. In this case, marriage lawyers in the UAE are best consulted. There are specific circumstances e.g. illness, the birth of a baby, disability befalling onto a partner which will make a judge disregard a prenuptial agreement and its terms. In many cases, terms will vary. They may be ceased as well to have effect only after the marriage lasts for a predetermined period of time

As you’ve already been through divorce once, it’s likely that you’re very much aware of how hard the entire procedure can be. Among the hardest aspects is the asset division in the UAE. Most people that remarry are now more realistic regarding the chance of any relationship coming to an end. They are more aware of the importance of coming to an agreement to mutually satisfactory terms and conditions that provide security and safety, most especially if there are children.

To speak to HHS Lawyers’ legal team regarding the drafting of a prenuptial agreement, send us a message or call us today!

Inheritance and second marriages in the UAE

Inheritance is often a complex matter which needs careful consideration prior to embarking on a new marriage. In the event that you die, your assets will be passed onto your surviving spouse automatically. This brings up a lot of issues, most especially when you have kids from your previous marriage.

If you have kids from your previous marriage, then you’ll most likely want them to get an inheritance in case you die. On remarrying, children and any grandkid won’t be receiving a portion of your assets automatically. Ordinarily, assets will be passed onto your new spouse, as well as the kids of your standing marriage.

You will be needing to take specific steps in order to make sure that your wishes are honored. This can be through a new will. As always, legal advice will prove to be invaluable in making sure that the inheritance of your children is protected.