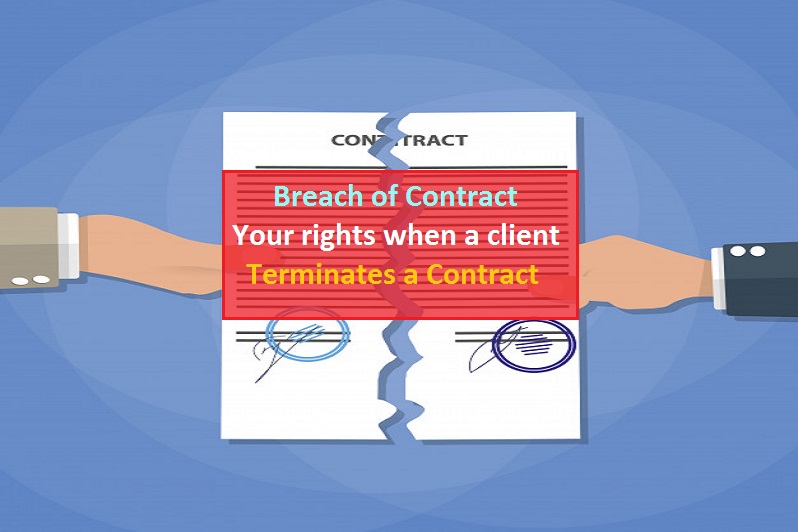 Breach of contract describes a violation to an agreement or contract which occurs when a party fails in fulfilling what it is supposed to as per the contract provisions. Sometimes, it involves the interfering of another party’s ability in fulfilling its duties. Contracts may be breached in part or as a whole.

Most contracts end as both parties fulfilled their obligations as per the contract. But, remember it is not rare for a party to fail in fulfilling obligations to a contract. A breach of contract can be brought to court in order to resolve the contract dispute.

When you are running a business and your client decides to cancel a contract, a suit for breach of contract can be upheld in local courts if certain requirements are met, which are as follows:

The Legal Remedies for businesses when clients cancel Contracts

Some of the remedies you’re able to pursue can be excluded explicitly in the agreement. Before you initiate court proceedings against your client, it’s worth taking a look at your contract or agreement and check which options are provided to you.

Some of the common monetary remedies for businesses when clients cancel contracts are as follows:

In most cases, there’s more for local courts to consider other than money. For these cases, they tend to be fully resolved with any of the following:

If you are in a situation wherein a client is attempting to cancel a contract with your business, we suggest you talk to commercial lawyers in UAE. Take note: parties can all decide to hire a mediator to mediate the contract dispute. Out-of-court alternatives in resolving disputes can work when parties involved in a contract mutually agree.

In the United Arab Emirates, a victim to a breach of a contract has the responsibility or duty in mitigating loss. Essentially, a breach of contract victim is not to actively make a situation worse.

The victim has to take reasonable steps in order to make sure the loss it incurs doesn’t increase any further. Any damages calculation aims in putting the party that’s innocent in the same exact position as if contract in questions was performed. For instance, if the victim of claimant has benefited with the contract breach, the benefit can reduce the damages that is owed by the defendant.

Although the duty in mitigating loss would be a voluntary duty, local courts in UAE can take into consideration the fact that some losses may not be the responsibility of the contract ‘breacher.’ If the claimant wishes to get the highest reward that is possible, it has to make sure it has prevented the losses from ballooning with its own actions or the lack of actions.

We know you may need further details and advice regarding breach of contract in UAE. If you want guidance with every single stage of legal matters in UAE, don’t hesitate to reach out to HHS Lawyers!

Home » Blog » Business Lawyer » Breach of Contract: Your rights when a client Terminates a Contract