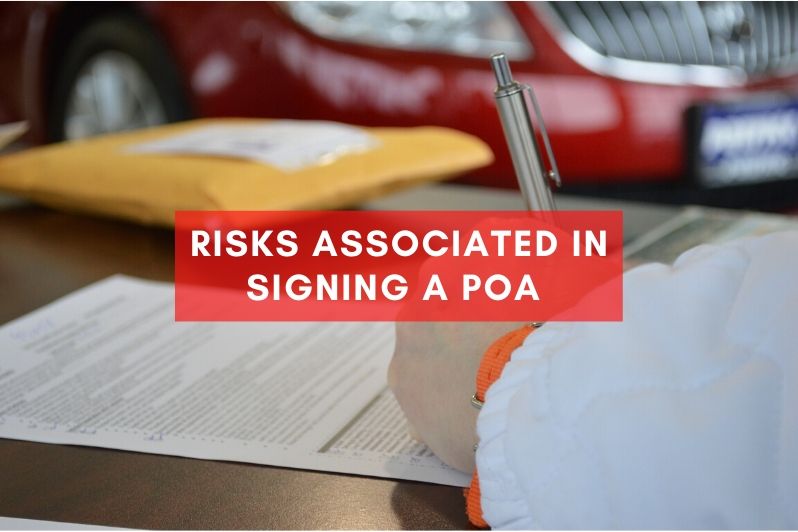 When you’re given a (POA) power of attorney, you’re being authorized in acting as the agent of the donor, principal or grantor. You can perform transactions as outlined within the limited or general power of attorney.

Most agents that are provided powers by the grantors can sell or buy properties or real estate, sign contracts or enter into agreements, and take on mortgages with the name of the grantor. Basically, the agent has the legal power or authority which makes him or her obligated as the principal sees fit without having to take on liability financially or legally. There are a number of conditions under which agents are to be held liable; however, they are only under certain circumstances, such as the following:

Risks of Agreeing in Acting as the Agent for a POA

The risks of an agent can vary, depending on the kind of power of attorney, as well as the terms that are agreed to during the agreement signing. However, there are important risks that are to be considered before signing as the agent regardless of the kind of POA being signed and they are as follows:

While most general POAs protect the agent from financial and legal liability upon acting in behalf of the grantor, it is still possible for the agent to make him/herself liable for certain decisions or transactions.

For instance, there have been instances documented wherein family members were the authorized agents for another family member who was comatose. The agents needed access in the mortgage account of the grantor so bills are paid on time. Financial institution which held the mortgage claimed the POA requires agents to cosign for the mortgage prior to gaining access to the account.

The bank officer was actually in violation to legislation by not being in compliance with the POA, requiring additional guarantors to the mortgage. The POA document should have been acknowledged and the financial institution officer should have given agents access to the account in question. If the agents cosigned to the mortgage rather than consulting with property lawyers in Dubai, they would‘ve been stuck with the mortgage even when there’s no need for it.

Bottom line, when anyone asks you for the signing of additional paperwork or guarantees as the agent of a POA, you have to check with an attorney in Dubai that specializes in power of attorney drafting. You may be signing yourself in a world of trouble financially.

Acquiring Liability from Having Personal Relationship with POA grantor

Spouses are considered as the next of kin for legal matters. That being said, it’s often not wise for a grantor to give his or her spouse POA in managing the affairs as that can affect him or her should the POA requires usage. What experts suggest, when you really want to make a spouse as the agent for the POA, would be to create a limited yet durable POA rather than the general one.

Giving unlimited access for the financials, legal affairs, and credit to anyone that is not a licensed lawyer in Dubai under the bar association’s authority is unwise and catastrophic at the same time. Furthermore, being the next of kin, the spouse or relative may become financially or legally liable if he or she is the one that will inherit the property as the grantor passes on, which renders the power of attorney moot.

The best option in avoiding the liability is in creating a limited POA, as mentioned earlier. If possible, create a trust that is intended for assets and real estate managed by third parties rather than providing a close family member or a spouse a POA. Doing so will be better compared to leaving your agent with an estate as inheritance as that can avoid creating legal and financial liability.

There can be many more risks not just from being an agent or attorney-in-fact to a limited/general POA, but also as the principal, granting authority through a power of attorney. If you want to ensure you get the results that you want out of this crucial piece of document, we suggest you talk to an attorney in Dubai. At HHS Lawyers, we have seasoned lawyers and legal consultants that can not only assist you with power of attorney drafting in Dubai, but also in advising you based on your specific needs and requirements.