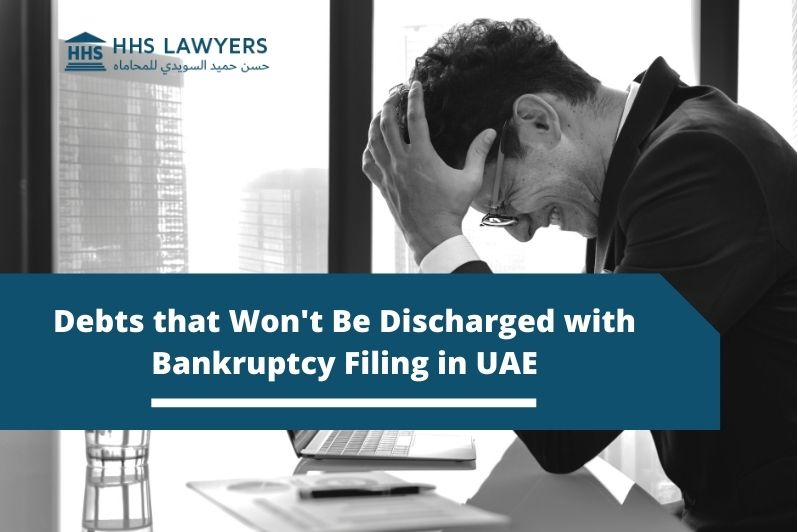 One of the primary reasons as to why business entities in UAE file for bankruptcy is to gain freedom to the burden of liabilities which they’re no longer capable of paying. By the end of a bankruptcy, either Chapter 7 or Chapter 11, an insolvent business will walk free from debts which existed during the time they were bankrupt. In general, creditors won’t be able to make claims against a bankrupt business for unpaid balances of debts as claims were satisfied by bankruptcy and creditors are no longer entitled in pursuing debts any further.

But, there’s a catch. Not all debts can be discharged when a business files for Chapter 7 or Chapter 11 bankruptcy. The most common non-dischargeable debts when filing for bankruptcy in UAE are as follows:

Can an individual declare bankruptcy in UAE?

There is a separate legislation for declaration of bankruptcy for individuals in UAE, specifically Federal Decree Law regarding Insolvency of UAE Natural Persons. The law offers debtors different ways in solving financials struggles. Debts may be settled through the creation of a repayment plan with the help of an insolvency practitioner appointed by the court which allows debtors in repaying dues while still able to continue working and residing in UAE. Debts can be settled also by liquidating assets in order to repay creditors owed.

With the personal insolvency law in UAE, an individual is not capable of discharging debt even when declaring bankruptcy. The court is going to make a decision regarding each case. When approved, the court will open a process for financial settlement. Local courts can reject bankruptcy allocations if debtors hand over falsified statements.

Are there penalties under the UAE insolvency law?

There are fines that may be imposed to creditors, which can range from AED 10,000 to AED 100,000, should they increase debts illegally or make sham claim against debtors.

For debtors, fines of anywhere between AED 20,000 to AED 60,000 will be imposed if debtors spend massive amounts of money which don’t match their respective turbulent financial situation even when being made aware that creditors will be affected adversely.

Debtors can also be penalized when a creditor is prioritized more than the others, most especially if doing so affects the likelihood of other creditors recovering their money. Debtors may be fined as well when they deliberately sell assets for less than what’s fair with their market value.

Insolvency Law: What Debtors can Do to Settle Outstanding Debt

How can corporate bankruptcy help in settling debts?

When declaring for bankruptcy in UAE, an automatic stay will place an immediate stop to creditors from foreclosing your house and other personal properties to buy you some time.

With Chapter 11 bankruptcy, debts of the company will be restructured as it’s become unmanageable. There are instances wherein the debts of a company are forgiven by creditors if they’re paid with equity in the company. With such arrangements wherein selling off equity is the last opportunity for a distressed business, a company gets to be free from the risk of having to go through an expensive and complicated bankruptcy.

Corporate debt restructuring reorganizes the outstanding obligations of a distressed company in order to restore the company’s liquidity and ensure that it is kept afloat. It can also be achieved through negotiations with creditors by decreasing interest rates while it pays off liabilities.

If you are in imminent risk of losing your livelihood, it is advised to get in touch immediately with a knowledgeable bankruptcy lawyer in UAE. An insolvency lawyer, especially from HHS Lawyers, can be engaged during all phases of an insolvency procedure, starting from the negotiation of voluntary arrangements up to then receivership and administration. If you want to know more about your options, call us today!