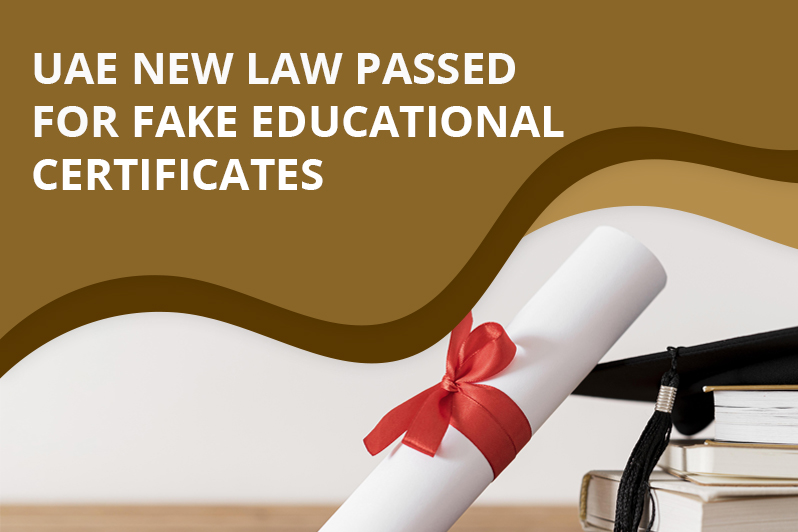 Jobseekers who utilize forged or fake educational certificates in order to work and reside in UAE will soon face 2 years in prison, as well as a fine capped at Dhs1 Million. Under the draft law that was passed on Tuesday by the FNC, those who are caught forging their qualifications will be facing much stricter penalties even when they claim that they don’t have any idea on the authenticity of their educational degrees.

People who are unknowingly or mistakenly use fake degrees will be put to trial. Everyone knows already regarding the rapid advancements of technology for producing fake  degrees. This has now become a trend across the globe and not just within the United Arab Emirates. A lot more people are seen getting fake degrees from unregulated and unlicensed academic institutes. This is something that’s relatively new in our society, and it’s not prosecuted with the existing laws. This is why the UAE government has decided to make it necessary to pass a comprehensive legislation regarding the matter.

Punishable acts as per the new legislation

Whoever commits the following acts will be punished with a fine of up to Dhs 30,000, jail time for up to three months, or both penalties:

The penalty can be doubled if a violator is found to have benefitted by getting employed or acquiring any moral or material benefit based on a fake degree.

A penalty of a fine of up to Dhs 500,000 and imprisonment for a maximum of one year or any of the two penalties will be inflicted on a violator who commits any of these acts intentionally:

A penalty of jail time or imprisonment for not more than two years, as well as a fine of not more than Dhs 1 Million and not less than Dhs 100,000 will be imposed on employees who accept educational certificates that were issued by unauthorized bodies in any transaction, most especially with the knowledge of truth regarding the academic degrees.

A penalty of jail time of up to two years, a fine of not exceeding Dhs 1 Million and not less than Dhs 500,000 or any of the two penalties will be inflicted on anyone who commits any these acts deliberately:

The draft law just passed recently stipulated that the court will order the benefits’ removal, particularly the ones that were obtained by a convicted criminal. The UAE Federal National Council committee on culture, information, sports, and educational affairs said it’s discussed the draft law amendments remotely, specifically on the utilization of bogus academic certificates in securing jobs in the UAE.

The proposed tougher regulations, which require the signing of the legislation into law by the UAE Cabinet targets all the dishonest job seekers, as well as provide punishment for employers and recruiters who accept the fake educational degrees knowingly.

Things you should know If you lost your Job in UAE

The current legislation imposes imprisonment of up to 3 years to anyone who is caught faking his or her educational certificate, under UAE criminal law. In 2019, UAE Minister of State on advanced skills and higher education told the members of the FNC that almost two hundred fake certificates from overseas universities were detected. He noted that UAE federal government requires academic degrees from overseas educational institutions to be accredited or attested by the ministry prior to them recruiting people; however, there are private companies that don’t request attestation.

If you are relocating to UAE and you need to provide the authorities with educational certificates, you need to undergo document attestation to verify their authenticity. If you want to talk to our labor and employment attorneys in UAE for legal advice, call us here in HHS Lawyers today.