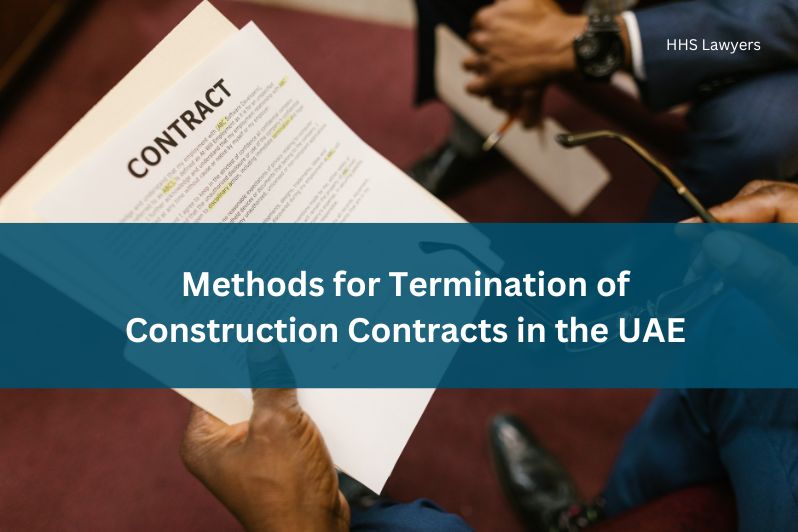 Construction contracts are governed by the Civil Transaction Law No. 5 of 1985, which supersedes any other law that could exist in the United Arab Emirates (UAE Civil Code). According to Articles 872 to 896 of the UAE Civil Code, sometimes referred to as “muqawala contracts,” which are more explicitly controlled, building contracts are prohibited (contracts to build). Specific clauses in these Codes are absolute, which means that the parties must expressly agree to opt out of them since they are default clauses. So, regardless of what the parties voluntarily agree upon in the construction contract, regulated by UAE Laws must adhere to Articles 872 to 896 of the Civil Code. We make an effort to analyze the legislation and talk about the methods of termination and associated compensations that a party is entitled to under UAE Law.

Termination of Construction Contract in the UAE: Required Methods

A contract may only be cancelled by mutual agreement, judicial order, or by legislation, according to Article 267 of the UAE Civil Code. It says, “If the Contract is legal and enforceable, no party may withdraw from it, nor may it be changed or revoked, unless by mutual agreement or according to a court order or a requirement of law.” However, Article 892 of the UAE Civil Code deals explicitly with the termination of such contracts since construction contracts include different clauses. The clause reads, “The contract for work shall come to an end by completion or by revocation of the contract by mutual consent or by decision of the court.”

Having fulfilled their responsibilities and obligations, the parties obligations under the contract will naturally end. As a result, the contract is automatically terminated upon completion of the work without needing a court ruling to support such termination.

Both parties may terminate a contract with consent before or after it has been signed. Article 268 of the UAE Civil Code allows for mutually cancelling a contract once the parties have signed it. According to the article, the contracting parties may mutually cancel the agreement by agreement once it has been reached. The notion of party authority to agree on contract termination even after execution is affirmed in Article 268. The parties may nonetheless agree to a mutually agreeable termination without specific provisions. Article 892 of the UAE Civil Code, which deals specifically with mutual contract termination for building contracts, is equivalent to this article.

Court orders may terminate the construction contract if either party violates one of the responsibilities outlined in the contract, which is a circumstance where the construction contract outlines the parties’ rights and obligations. As a result, the opposing party might apply to the court or arbitral tribunal for a decree of contract termination. In light of this, even if the parties agree on the termination clause, a court order or arbitral decision may only verify the actual termination. Suppose there has been a violation of the necessary UAE Law provision. In that case, the parties may file a court or arbitration tribunal petition without any stated termination clause.

However, even if the parties request a court order to terminate the agreement, the contract and its terms are still in effect until the court issues its ruling on the proposed termination. It must be remembered that the UAE Courts only permit the termination of a construction contract in the case of a significant violation of commitments. In other circumstances, the judge is more inclined to award damages for the alleged breach.

Further, Article 894 of the UAE Civil Code is another provision that expressly safeguards the party’s rights in remuneration for services rendered. It states, “If the contractor has initiated the execution of the work and then becomes unable to complete it for a reason beyond his control, he shall be entitled to the value of the completed work, in addition to the expenses incurred for its execution to the extent that the benefit that the masters derive from such work.” This Article states that the contractor is entitled to monetary payment for the job done and reimbursement for any additional costs incurred over the contract duration. Due to the provisions of this article, the contractor won’t suffer any consequences from termination and will be fairly compensated for any work previously done.

Read more: Common Reasons for the Breach of Property Contract

5. Termination under FIDIC Conditions of Contract

As mentioned, the UAE Law acknowledges the parties’ right to mutually agree on the conditions for seeking termination. It is advised that the parties agree on the termination clause since relying on the statutory termination might put them in an awkward situation. For guidance, the parties may consult Articles 15 and 16 of the Red and Yellow Books of the FIDIC Contract for Termination of Contracts, which cover termination by employer and suspension and contractor laws and regulations, respectively.

Construction contracts must precisely adhere to all norms and regulations under UAE legislation. It is usually advised for the parties to do correct due diligence before entering into the contract by obtaining appropriate legal counsel, given that seeking termination and damages for construction contracts may be challenging under UAE Laws. It is advised to use legal expert advice before terminating a contract since doing so is recognized to be an extreme action, particularly in the construction business. Our legal professionals will suggest measures to avoid termination of the contract or help you seek legal remedy in case of loss of your contractual rights.