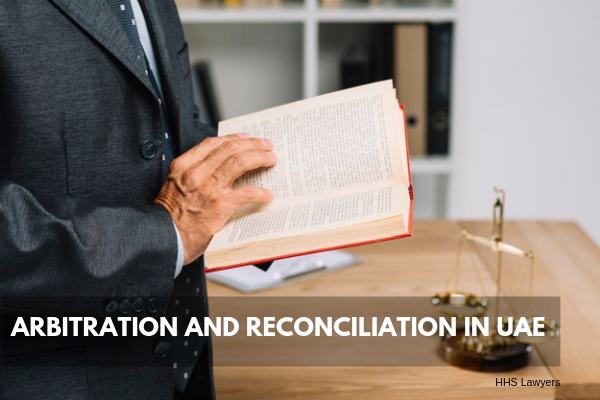 Conciliation is the agreement of the parties to attempt an amicable settlement through the conciliator who is selected by the individuals.

Arbitration is used to settle disputes and disputes in the United Arab Emirates. The arbitration has three types.

In binding arbitration, the parties shall appoint an independent arbitrator so that the parties to the dispute are bound by the final decision. Non-binding arbitration means that each party reserves the right to sue in court if the arbitral award is not accepted. In compulsory arbitration, the judge appoints an arbitrator early in the litigation process if the disputed amount is too small to warrant long-term litigation.

Chapter 3 of the Code of Civil Procedure deals with arbitral proceedings in the United Arab Emirates. It contains sixteen legal articles (203 to 218)

Is the settlement of trade disputes in local business communities.

Commercial Arbitration in the UAE:

The new Commercial Arbitration Law, in UAE, reinforces the confidence of foreign and local investors in state law. In addition, the provisions of the new law succeeded in covering all aspects related to arbitration, which helped to support the business environment and increase the competitiveness of the national economy.

The arbitration also ensures to economize expenditure by avoiding the length of procedures and shorten the ways to resolve the dispute. There are institutions in the UAE specialized in international commercial arbitration.

The League of Arab States defines judicial arbitration as an arbitration conducted by an official court authorized by the parties in the dispute to decide on it according to the rules of justice and fairness.

Judicial Arbitration in the UAE

Due to the UAE’s position as a global trading center, arbitration has become the best way to resolve commercial disputes. Many foreign investors prefer to transfer their disputes to arbitration committees for various reasons. Including the avoidance of lengthy proceedings to resolve trade disputes through controversial courts and international laws to save time, money and effort. In addition, the UAE does not follow the principle of precedent, common law in English, which makes the outcome of the conflict quite uncertain.

The court procedures are written in Arabic. This raises difficulties for investors from non-Arab communities. The jury’s decision may be adopted and implemented following its adoption by the court concerned.

Arbitration in the UAE is subject to the provisions of Federal Law No. 11 of 1992 on the Civil Procedure Code: Chapter three Arbitration: Articles 203-218 and Chapter Five Implementation of Foreign Orders, Orders and Bonds: Articles 235-238 and Chapter: Articles 239-243

Most arbitration centers in the UAE have their own rules, complementing the rules of the Code of Civil Procedure. In addition, the UAE has established several specialized federal courts to consider special cases, including IT courts, consumer rights courts, and cross-border criminal courts.

Among the oldest institutions in this area is the International Center for the Settlement of Investment Disputes (ICSID). It is a subsidiary of the World Bank. It seeks to settle disputes concerning foreign investors and host countries.

We also recall the Permanent Court of Arbitration (PCA) based in The Hague, the Netherlands. It provides the international community with a variety of dispute resolution services, being one of the oldest institutions of international arbitration.

In sports, we mention the Court of Arbitration for Sports. An international quasi-judicial body established to settle sports disputes. It is headquartered in Lausanne (Switzerland).

We are in the office of HHS Lawyers. A team of lawyers who are experienced in dealing with arbitrations of different and complex nature, which have been acquired from previous local and international experiences. We have also represented many clients before local arbitration boards and the experience has expanded to include arbitration cases before international arbitrators.