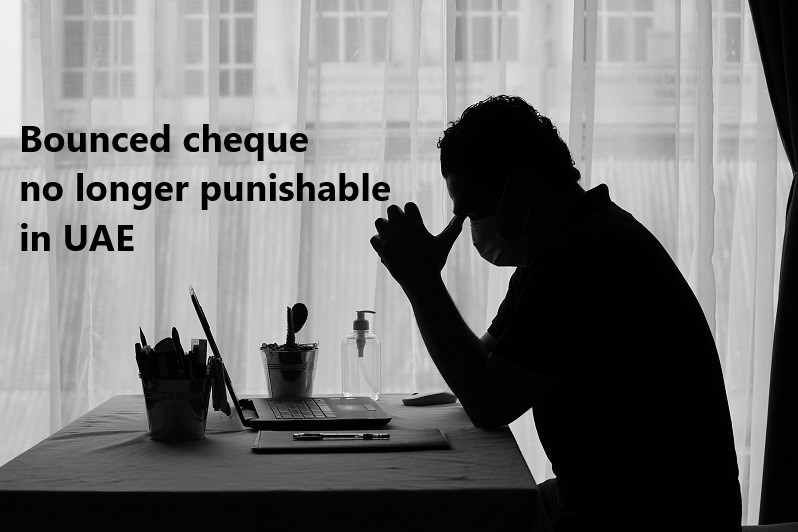 Commercial Transactions Law revisions that decriminalize issuing cheques without adequate cash (bounced cheque) have been implemented by Dubai courts. Cheque beneficiaries or bearers do not have to initiate criminal or civil charges for non-payment of the cheque following Federal Law No. 14 of 2020, revised in October 2020. Alternatively, they may approach the court’s execution judge directly to get an order directing payment of the cheque’s total amount or any leftover balance.

Cheque bearers are entitled to receive partial payments from banks if they have enough money in their account to do so unless they object.

What remains criminal by the amendment in civil transaction law?

According to the UAE Central Bank’s clarification, certain acts such as:

iii. Requesting that the bank refuse to encash the cheque without a valid reason are criminal offences.

The Central Bank has issued recommendations to banks and other financial institutions to highlight the consequences of giving a cheque without adequate money and refusing to execute partial payment of a cheque.

Penalties for forgery under the law

Those who forge or counterfeit a cheque face harsh consequences under the law. Cheque forgery shall be penalized with a minimum of one year in jail and a fine of no less than Dh20 000 and no more than Dh100, 000.

You may want to know: Bounced Rental Cheque: How to deal with it in UAE

Issuing of a cheque with bad intention

Despite the decriminalization of bounced cheques in UAE, specific cases will remain offences to accomplish decriminalization goals and their replacement by civil actions. Criminalization and fraud involving cheques are now defined as situations in which the bank is asked to refuse to pay a cheque before its due date without providing a valid justification. Under the modified laws, the cheque has been misplaced, or the bearer has been declared bankrupt.

If you close your account or take your whole amount out before writing a cheque or submitting it to the bank for cashing, you’ll still be breaking the law. The account might be locked, or the cheque could be signed in such a manner that it can’t be cashed.

Banks have a few options for controlling cheque payments:

Banks now have fewer options for limiting cheque payments under the revised legislation. In general, provided adequate funds are available, the bank (the drawee) is obligated to pay the cheque’s face amount upon presentation.

Although the legislation allows the bank to refuse payment if it receives opposition, the revision has limited the circumstances in which this disagreement is acceptable. As a result, it is limited to situations of cheque loss and bearer bankruptcy alone, ensuring that the cheque serves its original purpose as a payment method.

Strong civil alternatives have been created to recover the cheque value straightforwardly, including:

It indicates no need to submit a police report or a complaint with the police and prosecution, followed by the courts. As an executive bond, the cheque may be used to accelerate legal proceedings so that a bank can exercise its rights and make retrieving the cheque’s value easier. A judicial decision is not necessary for this instance.

A variety of punishments have been imposed, including the withdrawal of the guilty person’s current cheque book, the prohibition of the convicted person from obtaining a new cheque book for a maximum of five years, and the freezing of the legal person’s professional or commercial activity. The imposition of a fine, license suspension for a term of six months, and license cancellation or dissolution of the legal entity for repeated breaches have all been included as new additions for legal persons (excluding banks and financial organizations).

Also read this: Bounced Cheques Facts that You Should Be Aware Of

Requirements for presenting a cheque:

Partial payment of a cheque

Partial payment entails paying or settling a portion of the cheque’s value and thereby discharges the drawer and any endorsers or guarantors (if any). UAE legislation does not require that the consideration for payment at the drawee’s bank be equal to the value of the cheque.

The bearer of the cheque may accept partial payment and postpone the balance if it is considered in the bearer’s best interests- if the drawer’s financial situation is not good or in his or her best interest to save as much as possible the debt.

Suppose the available balance in the account is less than the cheque amount. In that case, the bank must make a partial payment of the money in its possession unless the cheque bearer disagrees and must mark each partial payment on the backside of a cheque and return the original cheque to the cheque holder along with a certificate of payment.

This article aims to provide a general overview of the subject. The information included herein may not be appropriate in all circumstances and should not be relied upon without seeking specialized legal counsel based on specific cases.