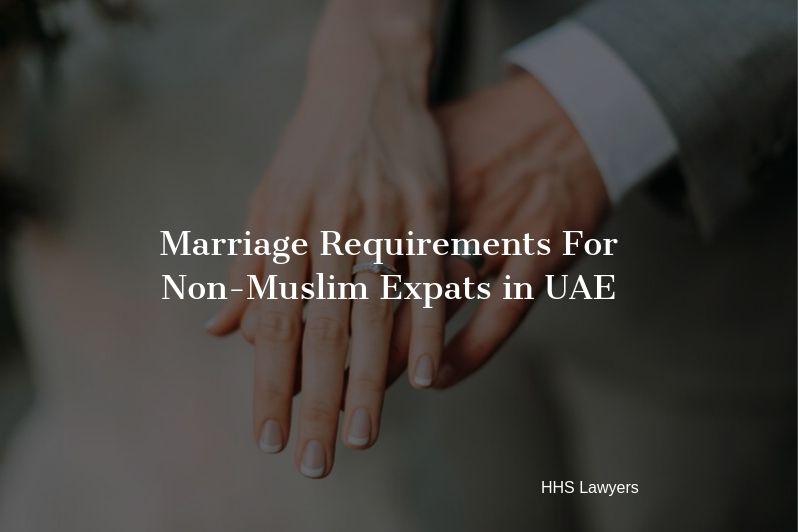 Marriage requirements for expat Non-Muslim go by sharia law in UAE. The rules and procedures vary depending on the nationality or religion. People with different religion may face some challenges.  If a nonresident, still want to exchange vows in UAE then both the parties should follow a few legal requirements as per UAE laws. Moreover, the rules of marriage differ for nationals, foreigners, or citizens of a different kind of religion. In order for the marriage to take place both the parties must follow a few legalities as mentioned in this article.

The following are the general requirements for a marriage to take place:

A premarital medical certificate for future spouses that can provide the medical status of both parties. This kind of certificate normally mentions that the persons looking to get married do not suffer from any diseases. This certificate is issued from any public health care facilities in Dubai

General conditions to get married in UAE

There are several conditions and requirements to get married in Dubai, and it is important to respect the applicable laws in this city and in the UAE. Foreigners and locals wanting to marry in Dubai should meet all the requirements in this matter, among which, the following are quite important:

Before getting married it is advisable for expats to check with their respective lawyers about the rules and regulation. If an expat that are not citizens of the UAE the following guidelines apply:

For a marriage to be valid in UAE it must be authorized by relevant authorities.  matrimonial status can only be accredited by a competent court. Once the fee is paid, the application is examined, and the decision is made upon the marriage in Dubai. Only after these steps, a certificate is issued by the authorities in charge.

An application for marriage may be rejected if the medical results show that the bride or groom is not medically fit to get married.

For non-Islamic marriages, the procedure varies depending on each spouse’s nationality.

Non-Muslims can conclude marriage formalities as per their religions.

Some countries seven require their citizens to file an application of intention to marry. You should ensure to carry out each and every procedure as per sharia and law, you may also seek the guidance of family lawyers in Dubai. They will help you out till you get married legally.

Our Marriage lawyers provide expert advice on court marriage procedures for non-muslim expats in UAE. For a consultation contact us.