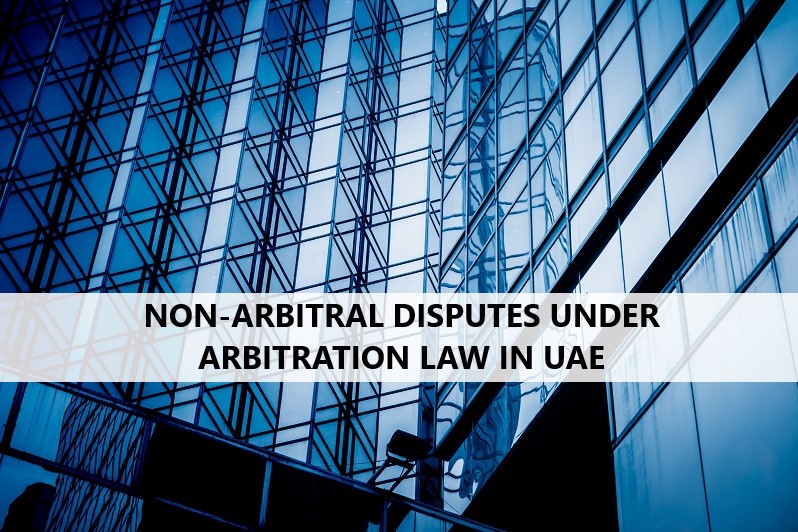 Parties often consent to Arbitration to resolve disputes for various reasons, including the fact that it is typically faster and more successful. However, certain disputes cannot be resolved by Arbitration Law. Usually, Non-arbitral conflicts involving issues for which conciliation is not feasible are not arbitral under the UAE Arbitration Law. Federal laws in the UAE define non-arbitral matters to encompass public policy, criminal law, and family law. Additionally, Arbitration cannot settle some commercial agency and distributorship issues and any labour disputes. This article will discuss the various conflicts which are not arbitral and cannot be decided under the UAE Arbitration Law.

What is a Non-Arbitral dispute?

Arbitration cannot resolve Non-arbitral conflicts. Each Arbitrator constrained in some way when it comes to resolving arbitral disputes. The Arbitrator cannot determine any matter that is beyond the scope of the Arbitration. In such a case, the Arbitrator’s award may be challenged in a court of law and thrown aside.

The following are some of the types of disputes that are unable to be resolved via Arbitration.

According to Article 6 of the Commercial Agencies Law, States courts shall have jurisdiction over any dispute that occurs during its execution between the Principal and the Agent, and any agreement to the contrary shall be null and void. Therefore, any dispute relating to a commercial agency decided by Arbitration may be considered null and void in UAE.

Following this provision, the Abu Dhabi Court of Cassation in Petition No. 814 of 2011 (issued on 21 December 2011), the Court of Cassation determined that when the legislature enacted Articles 3 and 6 of Federal Law No. 18 (as modified by Federal Law No. 14 of 1988).The legislator intended for the UAE courts to maintain jurisdiction over disputes arising out of the execution of commercial agency agreements. Similarly, UAE courts have the authority to invalidate any contradictory arrangement, such as an arbitration agreement, so long as the commercial agency agreement registered with the Commercial Agencies Register.

In Petition No. 180 of 2011 (issued on 12 February 2012), the Dubai Cassation Court determined that matters relating to the sale of off-plan units have been regulated by the legislator in Article 3 of Law No. 13 of 2008 regulating the Interim Real Estate Register in the Emirate of Dubai. Matters relating to the registration of off-plan units in the Interim Real Estate Register may not be the subject matter of Arbitration, as this is contradictory to public policy.

The subject matter of the Arbitration must be capable of ‘conciliation’, and therefore cannot include criminal proceedings. Article 209 of UAE Civil Procedure Code (CPC) states that “If a preliminary issue arises during the arbitration that is beyond the arbitrator’s authority, or if a challenge is filed that a document has been counterfeited, or if criminal proceedings have been instituted for such counterfeiting or for any other criminal act, the arbitrator shall suspend the proceedings until a final judgement is rendered on the matter.” After reading this Article, the Arbitrator does not have the power to decide any criminal matter.

Insolvency matters, or case involving bankruptcy, cannot be referred to the Arbitration. As per Article (3) of Federal Decree-Law No. (19) of 2019 on Insolvency, the Debtor may file an application with the Court to settle his financial obligations without litigating with any other party. Further, Article (7) of the Insolvency Law provides that the Court shall consider the application without notice or pleading. Therefore, the provision made it clear that the disputes between Debtor and Creditor must be presented before the competent Court of UAE. The issues of insolvency or bankruptcy are not within the scope of Arbitration.

HHS lawyers and legal consultants specialized in dealing with cases relating to Arbitration. The purpose of this article is to provide a general overview of the subject. Regarding your situation, you can seek expert guidance. Should you doubt the procedure for filing an arbitration request before DIFC-LCIA, don’t hesitate to contact us.