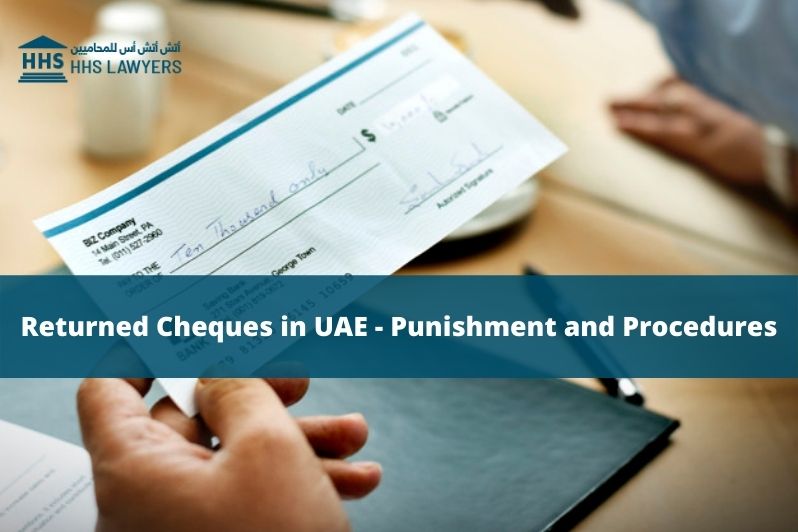 Many face difficulties related to managing their financial affairs and commercial payment processes, especially those related to payment by cheques. The issuing of a returned cheque (also referred to as bounced or cheques without balance) in the UAE is considered a criminal offense punishable by law. In this article, we will deal with the returned cheque, the penalties enforceable for issuing a returned cheque, and the procedures followed in that regard.

What are Returned Cheques?

UAE Law No. 18 of 1993, known as the Commercial Transactions Law, regulates the issuance of Cheques and their circulation.

Article (483) of the Commercial Transactions Law defines a cheque as “An order issued by a person (the drawer), to the bank (the drawee) that payment be made on the specified date (date of issue) an amount of money to a third person (the payee) as the beneficiary or bearer of the cheque ”

Article (632) of the Commercial Transactions Law authorizes the bearer of the cheque to take legal action against the person issuing the cheque or any party responsible for it if the cheque is presented within the specified period and has not been paid.

The most commons reasons provided by banks for returning cheques include:

Bounced Rental Cheque: How to deal with it in UAE

Filing Lawsuits in Accordance with the Federal Penal Code

Article (599) of the Commercial Transactions Laws prohibits the issuance of a cheque unless the drawer of the cheque has sufficient funds available in the drawee bank account to honour the cheque. The creditor will also be entitled to request a statement from the drawee bank to present as evidence in any future legal action taken against the drawer.

The UAE Federal Penal Code No. 3 of 1987 allows the creditor (the bearer of the cheque) to file a criminal and civil lawsuit against the debtor (the cheque writer) in the event that the cheque is returned and he is not able to cash it.

The Time Specified for Submitting a Cheque for Payment

The cheque is considered payable as of the date written on the cheque, i.e. the date of issue, and, in accordance with Article (617) of the Commercial Transactions Law, the cheque cannot be presented before this date.

Furthermore, as stated in Article (618) of the Commercial Transactions Law the cheque be must be presented for payment within six months from the date of issuance.

Article (634) of the Commercial Transactions Law states that the bearer reserves his right to have recourse against the drawer, even when he fails to present the cheque to the drawee, or to make a protest or to take an alternative action within the prescribed time limit; save where the drawer has provided the consideration for payment and such consideration has remained available with the drawee until the expiry of the time limit for presentation of the cheque, then such consideration ceased to exist due to an act not attributed to the drawer.

The Limitation Period for the Cheque in terms of UAE Law

Article (638) of the Commercial Transactions Law provides that the legal proceedings taken by the bearer against the drawer will not be accepted after two years from the expiration date of the period specified for the submission of the cheque.

Article (640) of the Commercial Transactions Law provides that in the event that a lawsuit is actually filed, the prescription period is calculated only from the date of the last action taken. In addition, the limitation period does not apply if the debt is settled or when a separate procedure is taken that leads to the renewal of the debt.

Laws regarding Bounced cheques in UAE

The Course of Legal Proceedings

When a cheque is returned, the drawer’s inability to pay it is proven through a statement from the bank, and the bank may not reject the request to issue this statement, but it can request a period not exceeding three working days after submitting the cheque to communicate with the drawer.

Likewise, the cheque holder is not obligated to solve the problem with the drawer through direct communication and has the right to initiate legal proceedings immediately. These proceedings may take the form of a criminal case or a civil suit.

Step 1: Filing of a complaint at the police department

The bearer of the returned cheque can file a complaint with the relevant police department. In Dubai, this would be done via the Dubai Police Department.

The police contact the person who issued the cheque or drawer, inform him of the complaint, and request his presence at the police station.

The drawer is allowed to immediately settle the matter by paying the value of the returned cheque to the complainant.

In the event that the settlement is completed, no further action will be taken.

The issuer of the returned cheque has the right to request some time to settle the matter and may be granted a reasonable time period to do so. However, he will be required to submit his passport at the police station as security.

Since the issuance of a returned cheque is considered a criminal offense in the UAE, as soon as the complaint is filed with the police, a travel ban and arrest warrant are automatically issued which prevents the drawer from leaving the UAE, or if the drawer has already left the UAE, he will be arrested upon re-entrance.

Step 2: Transferring the Bounced Cheque to the Public Prosecution

The role of the Criminal Court is to hear the litigants’ arguments and review the evidence provided, after which it will verify whether a crime has in fact been committed.

The fact that’s the drawer issued a cheque without having sufficient funds available to honor the cheque is a criminal offense under UAE law. However, it is worth noting that these acts are not considered a crime except in the case of the combination of the criminal act with the criminal intent, and the latter means the intention of the perpetrator of the act to inflict material harm on the complainant.

Upon verifying the existence of the elements of the crime, and in accordance with Article (401) of the UAE Penal Code, the Court can impose a fine and/or imprisonment for a period ranging from 1 to 3 years.

The Dubai Law No. 1 of 2017 for Criminal Orders has recently introduced a new mechanism for disposing of criminal complaints.

In terms of this law, the Public Prosecution in Dubai announced the introduction of the penal warrant system, which provides the Public Prosecutor’s Office with the power to issue a penalty order to impose a fine in cases of misdemeanors and minor offenses instead of referring such matters to the Courts for adjudication. This is in an effort to provide efficiency and lessen the workload across the judicial authorities.

Accordingly, the following fines may be imposed in terms of returned cheques not exceeding AED 200,000:

You can contact us now and book a bounced Cheque recovery consultation with one of the lawyers in Dubai.