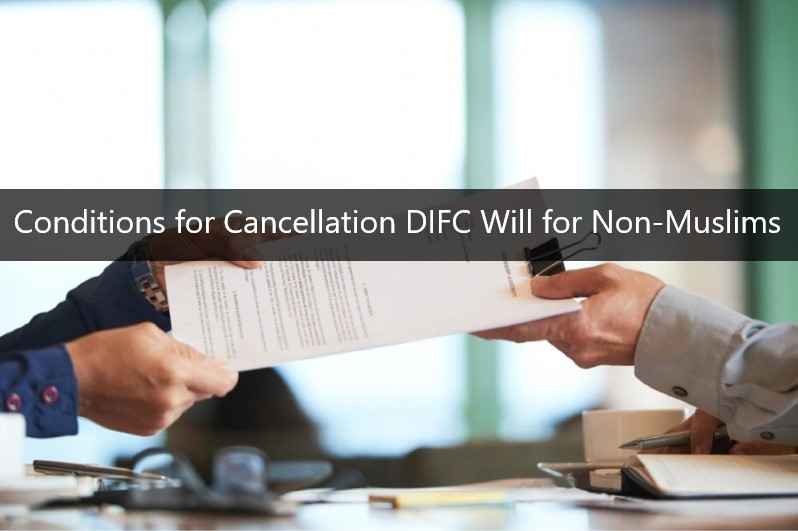 Revocation of Will means Cancellation of a Will. A Will becomes invalid when it is said to be revoked. When a person passes away, their estate is administered according to their most recent Will (provided it was properly drafted and was not revoked). A person is said to die intestate or without a will if their Will has been cancelled and no new Will was written, or no existing will has been renewed.

Revocation of Will under DIFC Wills and Probate Registry Rules

Part 6 of the Rules provides for the grounds based on which the Will can be revoked. It has been stated under Rule 18 of the DIFC Wills and Probate Registry Rules (WPR Rules) that no Will or part of a Will may be revoked in any way other than as set out in these Rules:

One of the most important aspects of a Will is that it can be cancelled at any time. Revocation of Will is possible by two methods:

A Will can be Cancelled Voluntarily in the following ways:

Let’s discuss each method of revocation of Will in detail.

Previously made Will can be cancelled by a later lawfully executed will that expressly or implicitly revokes the Will. One of the simplest methods to cancel a Will is to make a new one. The new Will should be well-written and include wording that expresses your wish to cancel all previous wills. An ‘express revocation clause’ will almost always be included in your Will if professionally written. When a new Will is signed, any previous ones are revoked. Rather than keeping several papers active simultaneously, it is always a good idea to create a new will that revokes any prior wills.

For revocation to be effective, the Testator’s intent must be clear, whether expressed or implicit, and an act of cancellation must be performed following that intent.

In other words, a written intention to revoke a Will can be expressed in the writing.  For a valid revocation, the writing must be duly performed and executed in the same manner as the Will

You may want to know: 7 Things You Should Know About Writing a Will

Documents required for cancellation of Will

An application for an order confirming the revocation of the Will shall be supported by:

(i) A certified copy of the later Will or written statement of intention to revoke;

(ii) Excerpts of the applicable legislation; and

(iii) An affidavit of a suitably qualified lawyer verifying the relevant law is required.

Revocation by Change in Circumstances- Rules 19 of WPR

The Marriage of the Testator revokes a Will. As per the rules, a Will is cancelled by the Testator’s Marriage if the Testator does not create a new Will after Marriage. Marriage usually invalidates a Will and renders it ineffective. It means that if you have a Will drafted and executed before your Marriage, it is possible that it has been automatically cancelled and that your Estate will not be directed in the way you expect or desire.

Exceptions to the Will being revoked upon Marriage

The Will either expresses an intention that a later marriage will not cancel it, or it was written in anticipation of the Marriage. In other words, the following conditions must be satisfied for a Will to be protected against revocation in anticipation of Marriage:

You should know about Registering a Will in the Abu Dhabi Courts: All you need to know

Effect of Annulment of Marriage or Divorce upon Will

Divorce, unlike marriage, does not void your Will instantly. Your Will remains valid once you’ve been divorced, but it takes effect as if your former spouse/partner died on the day the marriage is dissolved or annulled. As a result, it is critical that you draft a new Will as soon as feasible. As per Rule 19(4) of the WPR Rules, if a Testator’s Marriage is dissolved or annulled by a court of competent jurisdiction after he has made a Will,

(a) any appointment of the former spouse as an executor or trustee in the Will, or

(b) Conferring of a power of appointment on the former spouse; and

(c) any Property given or disposed of to the former Spouse shall pass or take effect as if the former Spouse had died on the date on which the Marriage is dissolved or annulled unless the Will expressly states otherwise.

In layman’s language, many married people mention their spouse as a beneficiary, trustee, or Executor in their Will.

The provisions of your Will is immediately change after your marriage is dissolved. Any property you left in your Will to your ex-spouse (before divorce) will be considered as if they died when your Marriage officially dissolved. Consequently, anything (property) they were supposed to inherit would be passed on to the next eligible beneficiary, according to Will’s provisions.

If you have given your whole property in the name of your ex-spouse with no other beneficiaries specified in the Will, your property at the time of divorce would be treated as if you died without a valid Will (known as dying “intestate”).In such situation the law will decide who gets what, if you failed to make a new Will.

You want to know: Non-Muslim expats: How to get a will for assets in the UAE

If your former spouse/partner was appointed as Executor, the substitute Executors named in your Will will take their place if you do not change your Will. In another circumstance, if your Will solely names your ex spouse as Executor, the Court will appoint a new Executor. This is generally a family member or a close friend.

So, whether your Spouse was a beneficiary or trustee, it’s advisable to write a new will as soon as possible following your divorce.

The purpose of this article is to provide an overview of the Subject. For your specific situation, seek legal advice. The first step in registering your Will is to contact a registered lawyer who can prepare your Will following the UAE law. It is crucial since the Will won’t be enforced if you don’t meet the fundamental legal criteria. Contact HHS Lawyers and Legal Consultants to learn more about how we may assist you with creating a new Will or updating an existing one.