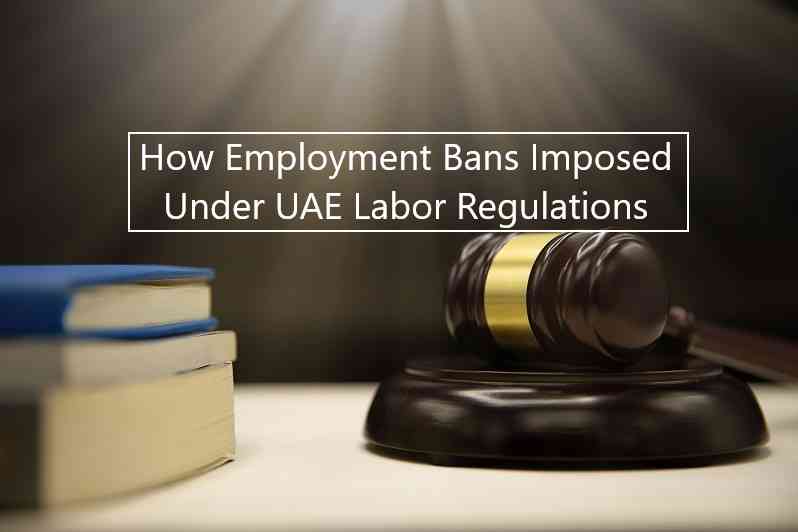 When are labor bans imposed in UAE?

The UAE labor and employment legislation is very clear on the rights and responsibilities of employers and employees alike. A labor ban imposed on an employee will result to the individual being banned from any employment opportunity in the country until the duration of the labor ban has been completed. Labor bans in UAE are imposed on the following unfortunate instances:

Breaking a standing employment contract in UAE prior to completing six months of employment with the company used to be seen as a very risky move. It is one which can certainly get a labor ban imposed. A six-month ban will be applied to an employee that left a company before the contract for employment has expired. This, however, was recently changed.

An employee can now break a contract prior to the completion of the six-month probation if he or she has completed the requisite notice period, as well as other terms which are mutually agreed by the employee and the employer. No labor ban will be imposed. But, it’s based on the mutual agreement between the employer and the employee only. In addition, this facility will depend on the worker’s skill level as described in the UAE labor legislation.

For skill level 1 (workers with undergraduate degree and/or higher), level 2 (workers with diplomas), and level 3 (workers with high school or secondary education), this clause in the labor legislation can be used in avoiding a labor ban.

For skill level 4 and level 5 (those without any educational qualification placed on record with the Ministry of Human Resources & Emiratization or MOHRE), they will get a labor ban when they break their employment contract prior to completing at least 6 months with their employers and then serving a notice period as agreed upon.

You may want to know: Remove Labour Ban Status in UAE

Should an employee resign and fail to serve the notice period agreed upon by both the employee and the employer, the employer can request the MOHRE to impose a labor ban on the employee. Two situations are allowed for an employee to resign without providing notice as per the UAE Labor Law Section 14. This is when the employer failed in holding up to its end of an employment contract with a specific employee or if an employee was proved to be assaulted by his or her employer and/or any of the employer’s legal representatives.

You must know: How to Avoid Labor Bans Under Limited Contract

Absconding refers to a situation wherein an employee does not turn up to fulfill work duties and responsibilities for at least seven consecutive days. Being absent for more than twenty days (non-consecutive) within a single year without providing the employer a valid reason for the absence also qualifies for absconding and a labor ban imposition in UAE.

As per Article 128 of the local labor legislation, in cases wherein there is a limited contract involved, an employee won’t be able to work in UAE for an entire year if the absconding case has been reported with the MOHRE.

No employer can hire or retain an absconding person legally during the duration of the labor ban. Employers are given 3 whole months to report cases of absconding and if they are to be accurate by the MOHRE, the Ministry will impose a labor ban for one year.

The employee will have a chance in proving he or she was not absconding. However, time is of the essence as when an absconding case has been filed, a report will not be withdrawn even when the employer files for withdrawal of the absconding case.

Must read: Facing labor ban under limited contract in UAE 2020

A limited contract in UAE is an agreement wherein an employee can’t quit or resign, even when a notice is provided by the employee, before the entire term is complete. The employer can request for the employee to be banned from getting employed in the country for up to 1 year.

An employer can also initiate the process of claiming compensation from the employee if damage or loss has resulted with the employee’s resignation.

It is crucial to consult with a labor and employment attorney in Dubai, UAE for more targeted legal advice. Call us here in HHS Lawyers today!