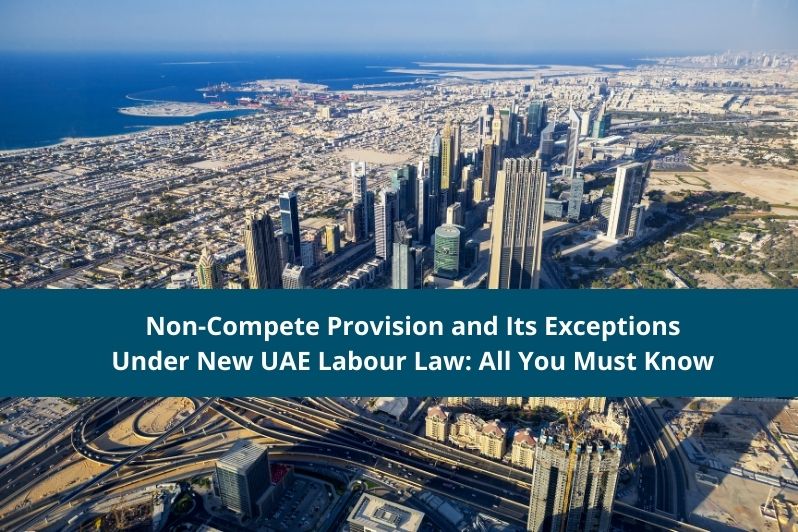 The new UAE labour law took effect on February 2, 2022, and has effectively replaced the existing labour law, Federal Law No. 8 of 1980 and its revisions.

The new legislation, Federal Decree-Law No. 33 of 2021 on the Regulation of Labor Relations, modifies the old law in various ways. One of the most contentious problems in an employment agreement is the legality of restricted covenant clauses, such as a non-compete provision, which forbids workers from working for a rival after their employment arrangement ends. Are there any exceptions to the non-compete provision under the New UAE Labour Law? Here’s an overview of what the new law says about employees who go to work for competitors.

What is a Non-Compete Agreement?

Under this clause, the employee agrees not to engage in any activity that is directly competitive with that of the employer, for a limited period, within a restricted geographical area and defined fields of activity. A non-compete agreement forbids an employee from doing the following:

Article 10 of the new UAE labour law, Federal Decree-Law No. (33) of 2021, lays out the procedures enabling a full-time employee to transfer to another company, which might be a competitor. Further, Article 10 lays forth the fundamental requirements that a non-compete agreement in an employee’s labour contract must meet.

In Article 10 of the new UAE labour law, Federal Decree-Law No. (33) of 2021, the employer may include in the employment non-compete contract a provision stating that the worker shall not compete with or engage in any business that competes with him (employer) in the same sector after the contract expires unless the nature of the worker’s work allows him access to the employer’s customers or business secrets.

Conditions that make the Non-Competition Clause Invalid or Unenforceable

The non-compete provision is invalid:

Also read – Some key features of the new UAE labour law: what you must know?

Enforceability of a Non-Compete Clause

The new rule empowers an employer to enforce a non-compete provision if the employee has access to sensitive business information that may result in financial harm to the company if revealed to a rival. According to the new rule, if an employer wants to maintain its economic interests, it must enter into a Non-Compete Agreement with the employee.

Above all, the former employer must negotiate a Non-Compete Agreement with the latter, depending on whether the employee had access to sensitive information.

New Rules Relating to the Non-Competition Clause Under Cabinet Resolution No. (1) of 2022

While Article 10 of the New Labour Law stipulates the conditions mentioned above, MOHRE has issued a new decree – Cabinet Resolution No. (1) of 2022 (Executive Regulation)– that expands on the regulations and execution of the non-compete provision.

The following requirements shall be met by a non-compete provision, according to Article 12(1) of Cabinet Resolution No. (1) of 2022:

Home » Blog » Labor Law » Non-Compete Provision and Its Exceptions Under New UAE Labour Law: All You Must Know