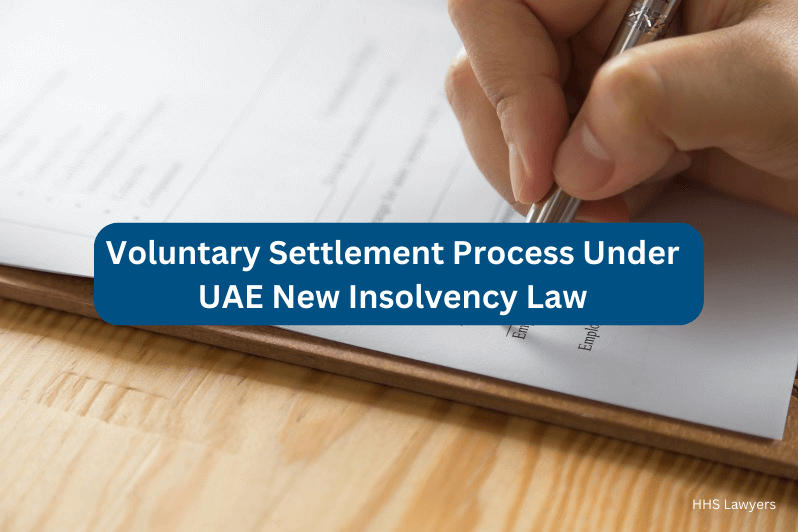 In August 2019, the United Arab Emirates published The New insolvency Law No. 19 of 2019. The “voluntary settlement procedure” is a permitted concept under insolvency law. The procedure has been started to enable people with financial issues to request a structured payment plan via a court-led process. This procedure allows people to voluntarily apply for bankruptcy, use their legal rights to safeguard their assets, and work with their creditors to create an installment agreement.

Following the Bankruptcy Law, a person may petition for personal insolvency by going before civil courts. Via the mediation procedure that the Court started, with the involvement of relevant specialists authorized by the Court through a step-by-step process, a structured payment plan may be developed.

Insolvency: What Is It?

A person or business is said to be insolvent when they cannot pay their creditors as soon as their payments are due. Unofficial agreements with creditors, such as the creation of alternative payment arrangements, are likely to be made before an insolvent firm or individual becomes engaged in bankruptcy procedures. Poor financial management, a decline in cash inflow, or an increase in costs may all lead to insolvency.

The voluntary settlement process, which is similar to “Preventive Composition” under the UAE Bankruptcy Law, is introduced by the Insolvency Law and its amendments. Only the debtor may request a voluntary settlement, and only if they are not yet “insolvent” (i.e. the debtor has not stopped paying its debts as they fall due for a period exceeding 50 consecutive business days).

Read More: UAE Bankruptcy Law Amendments: All you must know

It is essential to keep in mind that if any of the following situations exist, the civil courts will not accept a debtor’s request for a settlement:

Voluntary Settlement Process – A helpful weapon for debtor and Creditor

The creditors might participate actively in the settlement plan approval process via the voluntary settlement procedure. On the contrary hand, it forbids creditors from submitting a single application for action against the debtor’s assets or a request for the debtor’s bankruptcy and liquidation. Without participating in the voluntary settlement procedure, secured creditors may ask the Court to execute their protection as payment for any outstanding and unpaid obligations.

The Insolvency Law offers simplified insolvency proceedings that the Court may start (if it rejects or declares the voluntary settlement plan null and invalid), the insolvent debtor or creditors with claims totaling AED 200,000 or more.

All debts, whether secured or unsecured, become due and payable as soon as the Court issues an order to begin the bankruptcy procedures. For three years after the issuing of the bankruptcy judge, the debtor is barred from managing or engaging in business concerning any of its assets, securing any new obligations with guarantees or securities, or procuring any new funding.

In addition, the Court has the authority to postpone all criminal proceedings relating to any bounced checks that the debtor has issued and suspend all enforcement actions and legal claims brought against the debtor. It can happen at the Court’s discretion or the debtor’s request.

According to the ranking of the creditors, the proceeds from the asset sale are dispersed. The Court may provide permission for secured and preferred creditors with outstanding and payment obligations to independently assert their security interest against the debtor’s assets. If not, the profits from the sale of the assets covered by the secured creditors’ payments will be used to pay them. Any secured creditor obligation that exceeds the profits from the sale of the secured assets is regarded as unsecured debt.

It is unquestionably a good thing that the Insolvency Law was passed since it would eventually increase consumer trust in retail lending and foster a more secure lending environment with adequate debtor safeguards. Due to the Insolvency Law’s recent passage, several issues still need to be resolved via the law’s practical application by the UAE courts and the issuing of supplemental rulings.

Please don’t hesitate to contact one of our attorneys for further details on the UAE’s new insolvency law.

Read More: Insolvency Law: What Debtors can Do to Settle Outstanding Debt