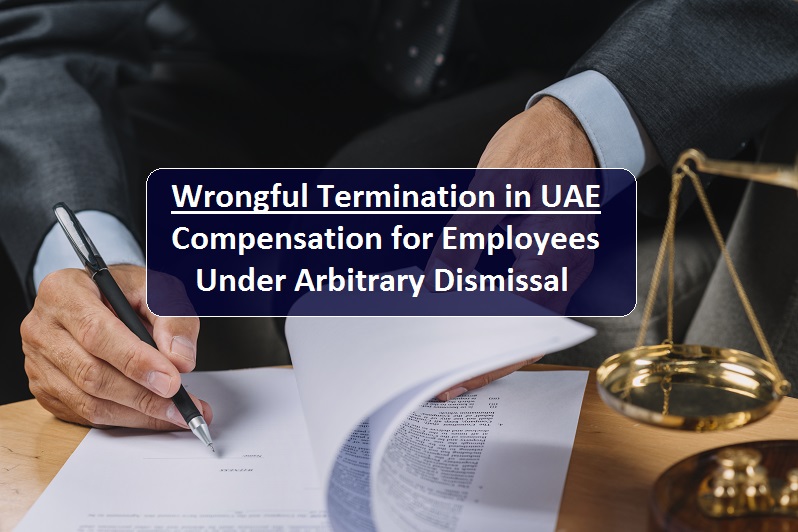 Unlike in other countries, especially in Europe in which employment relationship termination can become very complicated for employees that have provided long-term service, a UAE employer has the ability in terminating the employment of a staff member with relative ease given it has provided a notice that’s agreed by parties mutually.

Despite the general ability of employers to terminate employees, Federal Law of 1980 No. 8, which is the UAE Labour Law, acknowledges that they are certain circumstances wherein employees are unfairly dismissed. The UAE Labour Law provides rights of employees in the UAE to claim compensation if they are able to provide sufficient proof that the dismissal was indeed unfair.

Circumstances in which termination is regarded as unfair or Arbitrary

UAE Labour Law Article 122 states that the termination of an employee can be considered as unfair when the reason for the termination is not related to the employee’s performance. As the legislation doesn’t provide any further explanation regarding instances wherein employment relationship cancellation can be considered as arbitrary, courts will give employees the responsibility in presenting proof of unfair conduct of employers.

UAE courts have also held that for employment contracts that don’t have fixed terms, redundancy may be considered as a valid reason in the termination of employees and such won’t be treated as unfair or arbitrary dismissal. Take note: an employer has to show proof that redundancy is, in fact, genuine, for instance other employees are redundant as well and the job in question won’t be taken by a different employee.

Examples of where UAE courts have ruled dismissal was arbitrary and entitled employees to compensation are as follows:

Compensation for Employees from Arbitrary Dismissal

In assessing amount of compensation that is payable to an employee for arbitrary dismissal, UAE courts will regard the kind of employment that is in question, as well as the duration of employment and extent of damage the employee has suffered. Notwithstanding this, UAE Labour Law Article 123 states that compensation for arbitrary dismissal can’t exceed amount equivalent to salary of the employee for three months.

In addition to the arbitrary dismissal compensation, employees may claim their notice period dues, gratuity, and other unpaid dues that they are entitled to form their employers.

Termination of Contract without Notice

An employment contract, regardless of whether it is limited or unlimited, may be terminated as permitted by the law and be done so without any notice period.

An employer does not have to provide notice to the termination of an employment contract and deprive the employee service gratuity if the employee does any of the following:

If you want to know more regarding arbitrary dismissal and wrongful termination, talk to HHS Labour lawyers in UAE, employment lawyers in Dubai.