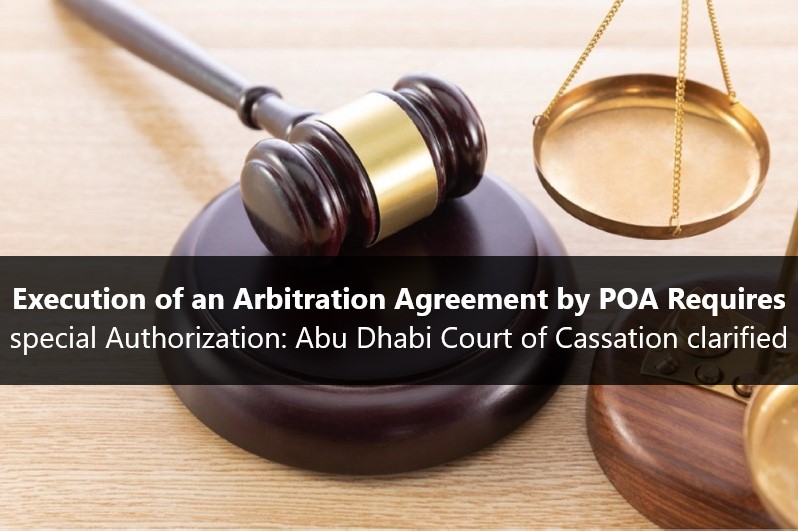 In a recent decision by the Abu Dhabi Court of Cassation in Case No. 922 of 2020, the Court established that an arbitration agreement entered into by a representative on behalf of a party would be valid only if the representative acts according to a Power of Attorney (POA). Such terms of POA must be stated explicitly to confer an exclusive power to do so (i.e. an authority to enter into an arbitration agreement).

Legal Provision involved in the case

Article 58(2) of the UAE Civil Procedures Law was the primary provision involved in the current case. It states that no admission or waiver of a right, settlement, or submission to Arbitration may be undertaken without specific authority.

You should read: NON-ARBITRAL DISPUTES UNDER ARBITRATION LAW IN UAE

Factual Background of the Case

The Contractor challenged the petition and contended that the Court lacked jurisdiction to hear the matter since the parties’ subcontracts were subject to Arbitration.

The Court agreed with the Contractor’s argument and dismissed the lawsuit because the subcontract was subject to an arbitration agreement. As a result, this Court lacked the jurisdiction to resolve the dispute.

The sub-contractor filed an Appeal before the Abu Dhabi Court of Appeals and challenged the Abu Dhabi Court of First Instance decision. The Court of Appeals affirmed the judgement of the Court of First Instance. It ruled that the Subsequent POA ratified the previous Arbitration Agreements. Such ratification gave the Representative the power to execute the acts as set out in Article 58(2) of the UAE Civil Procedures Law.

Subsequently, the Subcontractor filed an appeal with the Court of Cassation.

The Subcontractor then filed an appeal with the Court of Cassation, claiming that the arbitration agreements were invalid and unenforceable because the Representative lacked the necessary power to agree to Arbitration.

You should know: HOW TO ENSURE ABOUT THE VALIDITY OF ARBITRATION AGREEMENT IN UAE

The judgement of the Abu Dhabi Court of Cassation in this instance indicates that the power given under a POA shall be carefully construed. If any doubt arises regarding the Representative’s capacity to participate in an arbitration agreement, such arbitration agreement is considered null and unenforceable.

The purpose of this article is to provide a general overview. Any party wishes to give their Representative the power to enter into arbitration agreements on its behalf. In that case, such authority should be expressed clearly and explicitly in the POA. . It is strongly recommended that you get the assistance of a competent lawyer while writing a POA to prevent any challenges to the enforceability of an arbitration agreement.

HHS Lawyers and Legal Consultants’ attorneys are incredibly proficient in drafting POAs. Should you more about the case, don’t hesitate to contact us.