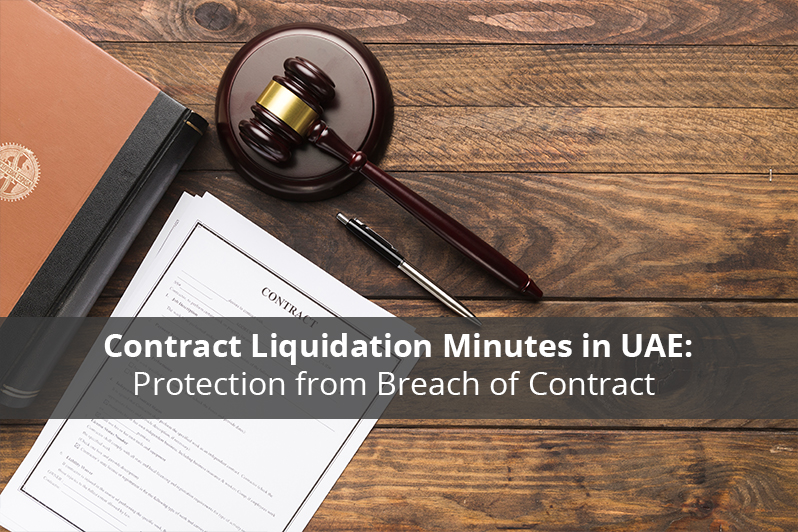 Contract liquidation minutes are the provision in a contract to pay an amount for damages in the event that a party commits a breach of contract.

Contract liquidation minutes are also known as liquidated damages clause. If it is not carefully drafted by the parties, this clause would invite a lot of litigation and legal trouble which it intends to eliminate. It is best to consider a more typical clause wherein parties stipulate the damages and amount agreed by the parties mutually in case of a delay in delivery.

An example of a liquidated damages clause:

“If seller breaches the obligations stated in this document in delivering goods or services as per the schedule that has been mutually agreed, the buyer shall recover AED per day for every day of the delay to be referred to as liquidated damage.”

Parties to a contract enter into this kind of stipulation in order to eliminate disputes with regards to the amount of the damages, which is a very expensive aspect when brought to litigation as it involves retention of attorneys and legal consultants, and significant discovery.

Liquidated damages clauses also eliminate mitigation disputes. With this kind of clause, a breaching party won’t be able to seek the reduction of damages or completely avoid the payment for such by claiming that party that was aggrieved failed in mitigating which can undermine predictability of such clauses which is what it is supposed to guarantee.

A clause for liquidated damages also acts as lightning rod with litigation as it frequently strikes a breaching party to be excessive when defaults occur later on.

In litigation, a breaching party can challenge the nature of the liquidated damage clause which is optional and the option of a buyer in resorting to it. There are a couple of courts which have ruled sophisticated parties agree to an optional liquidated damages clause, but the majority rule seems to be that this clause is unenforceable.

The court can ask to struck down such clause as it may not involve reasonable attempts in estimating the loss. It is, therefore, best to avoid utilizing an optional liquidated damages clause.

If there is really a need for such clause, then consider the incorporation of the following provision:

Parties often fail in giving sufficient consideration with regards to the kinds of damages which they plan on liquidating. To give an example, say a seller in a hypothetical clause for liquidated damages is a widget manufacturer and the buyer sells the widgets. The delay of the manufacturer can cause the wholesaler in being late to its performance downstream. The wholesaler would be suffering reputational harm. It may even be required in paying delay damages onto customers which would be the retailers.

By contrast, to provide another scenario, a delay with the manufacturer can also cause the wholesaler in losing its resale onto retailers. These two damages have outcomes that are different, which is why there is a need for careful consideration when drafting a clause for liquidated damages. Specify the kinds of losses that would and would not be liquidated.

In order to address the situation we just mentioned, the parties can include a clause along the lines of:

When a Clause for Liquidated Damages is Allowed

Liquidated damages can be considered as valid with the following situations:

You may still have questions regarding liquidation services or contract liquidation minutes in UAE. If that is the case, consult with our legal drafting team here in HHS Lawyers.