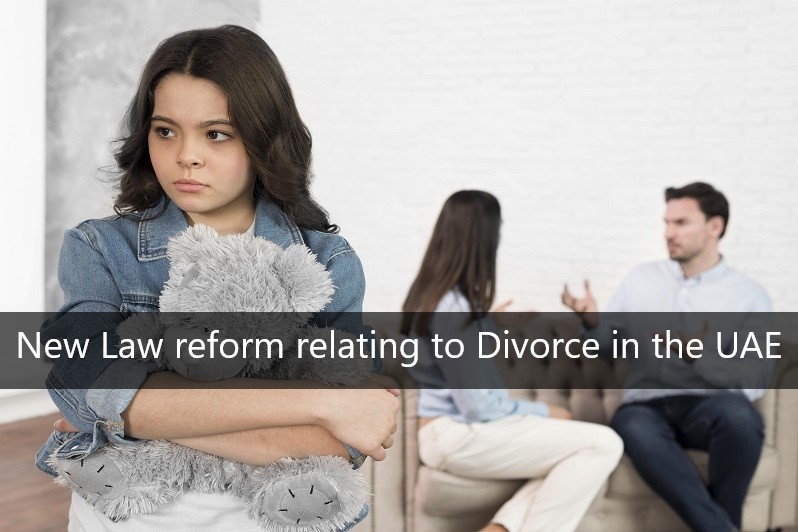 If a couple of any religion decides to divorce in the UAE, the country’s laws where they married will govern the procedures. In other words, Expats seeking Divorce can now use the laws of the nation where their marriage took place in divorce procedures in the UAE. The Personal Status Law, founded on Sharia law principles, covers marriage, Divorce, inheritance, and other personal matters in the UAE. One way to summarize these reforms is that Sharia law will no longer be applied to deal with non-citizens’ family law matters.

The UAE legal system has recently undergone one of the most significant legal reforms in recent years, bringing a slew of reforms to family and personal legislation, including Divorce, separation, and inheritance following Divorce. One such change is relating to Divorce and Inheritance. Amendments to existing laws and the adoption of new laws aim to regulate important personal and civil laws, with provisions allowing non-Emiratis to have their personal matters handled according to their home country’s law. This article will highlight the significant changes that have taken place due to the recent amendment in the Federal law.

You may want to know: How to Handle a Divorce While You’re Pregnant

According to the above-mentioned amended provision, Couples who were married in their home country but applied for Divorce in the UAE must follow the divorce rules of the nation where the marriage took place, according to the new legislation.

Furthermore, the UAE’s Personal Status Law equally applies to the non-citizens. They might, however, request that their country’s legislation be implemented. Provided that Articles 12, 13, 14, 15, 16, 17, 27, and 28 of the Federal Law No. 5 of 1985 of the UAE Civil Transactions Law, as modified, should not be compromised by the application of foreign law.

Let’s use an example to comprehend this reform further. Assume A and B married in England under the Marriage Act of 1949. Following their marriage, the couple relocated to the United Arab Emirates and began working for one of the UAE’s international firms. After a few years, A found B guilty of adultery and filed a divorce petition against B at the UAE’s competent court. In this situation, the most critical question before the court is which law should be applied to expats seeking Divorce in the UAE.

As per the new amendment, the court will now apply the State’s legislation where the marriage was consummated. The competent court will apply the Matrimonial Causes Act 1973 (Divorce Law of England) in the scenario mentioned above.

You may want to Analyzing the Most Common Causes of Divorce

What was the position previously?

Prior to the Amendment, Article 13 (2) of Federal Law No. (5) of 1985 Concerning Civil Code stated that Divorce should be governed by the law of the State of the husband upon the time of Divorce.

Further, it was previously stated under Article 1 of the Federal Law No 28 of 2005 for Personal Affairs that Non-Citizen Residents can file for Divorce in their home country (domicile) or apply for Divorce in the UAE. It means that relevant parties may ask to apply their laws to personal status matters.

Whenever the law of the parties’ home country fails to cover an aspect of the divorce procedure, the court used to apply the UAE law.

Until now, Non-citizens expats who divorced in the UAE had the option of having Sharia law applied or requesting that their own country’s laws be used instead. If the couple possessed separate passports, the husband’s citizenship would be used. If an aspect of the divorce procedure is not covered by the law of the individual’s native country, the courts may adopt UAE law instead.

Now, the personal status law of the country where the marriage took place will be applied.

What is the Outcome?

It’s a significant change for couples who previously had to go through lengthy and inconvenient procedures to finalize their Divorce and share their assets. Changing the relevant jurisdiction in a divorce settlement might significantly impact the financial consequences for both parties. The revised law eliminates the need for petitions or disagreements about which laws should apply in case of Divorce.

The purpose of this article is to provide an overview of the subject. This article was produced with great care to ensure correctness. Because individual circumstances may vary, it is not meant to give legal advice or predict a specific conclusion. Readers considering legal action should seek legal advice from an experienced Divorce attorney to learn about current laws and how they may apply to their case. Don’t hesitate to contact us if you require any legal assistance on the subject presented or related issues.