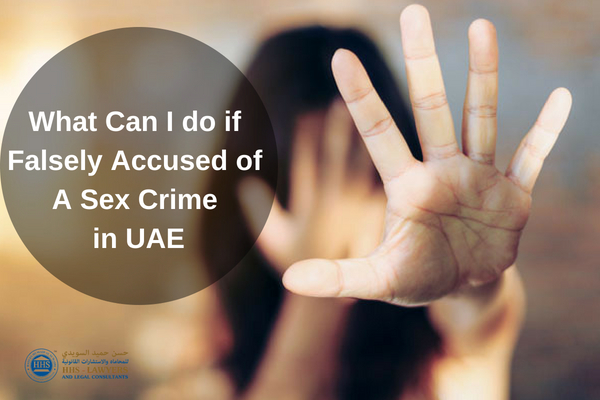 What is a Sex Crime?

This is the type of crime that involves a sexual offense. Usually, it includes rape or any sexual abuse that is stated in a country’s laws as sexual offenses.

There are countries in the world that make prostitution legal and illegal as well. This is the act of accepting money in exchange for sexual actions.

Rape is the act of forcing sexual intercourse or penetration towards someone against their will.

This is having a sexual intercourse with an individual who has not yet reached the legal age of consent. There can be no force for this to happen but the perpetrator can still be charged with an unlawful act as it violates the law.

This is a kind of sex crime that is composed of sexual touching or contact that is not consented by an individual.

Why Do People Make Up False Accusations?

What Can You Do in This Event?

You need to find the best attorney that you can find. In the UAE, there are a lot of law firms in Dubai with a team of lawyers who are experienced in this field. By sharing them what happened and your side of the story, you can understand your case more and know how to face it.

When you receive the news of the accusations or if you’ve been served, your attorney can give you an advice on what you should do or not do. In this case, you should really not own up to that lie regardless of what happens or what other people advise you to do.

Update your family and friends about what happened

It’s always good to have a support system especially when it comes from your family or friends. You should tell them the whole story before they hear about it from someone else. You can let them know of your fears and any advice that they can give you.

Collect evidence if you are the victim

Some people might be just turning the situation around in a negative way. In this, they might be accusing you of something that they did in order to escape the consequences.

It is possible to counter their claim. You can speak with one of the lawyers in Dubai right away if this is the case so that you can both plan on what to do. Evidence should then be procured for your claim to be supported.

We have been operating for 10 years as one of the leading law firms in Dubai. HHS Lawyers & Legal Consultants in Dubai can represent anyone from any Emirate even if we are based in this location. Regardless of what case you are facing, we are more than willing to help you out with it.

Our team is composed of some of the best lawyers in Dubai and they are all open to answer all your questions and advise you with regard to your case. Call us today and book a consultation with them.